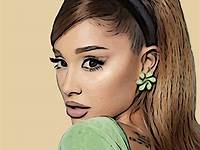 Biography: Ariana Grande is an American singer, songwriter, and actress. A multi-platinum, Grammy Award-winning recording artist. Born in Boca Raton, Florida, Grande began her career in 2008 in the Broadway musical, 13. She rose to prominence for her role as Cat Valentine in the Nickelodeon television series, Victorious (2010–2013) and in its spin-off, Sam & Cat (2013–2014). As she grew interested in pursuing a music career, Grande recorded songs for the soundtrack of Victorious and signed with Republic Records in 2011 after the label's executives discovered videos of her covering songs that she uploaded onto YouTube. She released her debut album, Yours Truly, in 2013. A 1950s doo-wop-influenced pop and R&B album, it debuted atop the US Billboard 200 and spawned her first US top-ten single, "The Way", featuring rapper Mac Miller.

Grande's second studio album, My Everything (2014), continued the pop-R&B sound of its predecessor and incorporated EDM elements. It topped the Billboard 200 and featured four US top-ten singles: "Problem", "Break Free", "Bang Bang", and "Love Me Harder", the most of any artist that year. Grande's pop-R&B styles extended on her third studio album, Dangerous Woman (2016), which was her first of three consecutive number-one albums in the UK, and spawned top ten hits such as the Grammy nominated title track and "Side to Side". On her next two albums, Sweetener (2018) and Thank U, Next (2019), Grande experimented with trap while maintaining her characteristic pop-R&B tones; being projects with her most creative control yet and showing a more personal and vulnerable side, both debuted at number one in several countries and were acclaimed by music critics. The former won a Grammy for Best Pop Vocal Album and spawned the international top three hit "No Tears Left to Cry", while the latter broke several streaming records. Grande became the first solo artist to hold the top three spots on the Billboard Hot 100 simultaneously when "7 Rings", "Break Up with Your Girlfriend, I'm Bored" and "Thank U, Next" did so in 2019. She is also the first artist to have the lead singles from each of their first five studio albums debut within the top ten in the US.

Grande has received various accolades, including one Grammy Award, one Brit Award, two Billboard Music Awards, and three American Music Awards. All five of Grande's full-length albums have been certified platinum by the RIAA. As one of the leading streaming pioneers in the world, she has amassed over 35 billion streams on platforms like YouTube, Spotify, and Apple Music and is the most listened female on the latter two. An influential figure on social media, she is an outspoken feminist and supporter for LGBT rights. She asserts control over her public image and is known for her ponytail hairdo and bold fashion statements. In February 2019, she became the most followed woman on Instagram. Forbes ranked her amongst the highest-paid celebrities in 2019, and Time named Grande as one of the 100 most influential people in the world in 2016 and 2019. Billboard recognized her as the "Woman of the Year" in 2018.